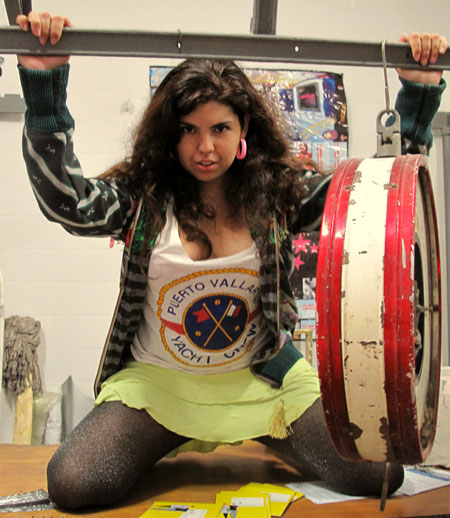 Article and photo by Whitney Weiss
I wear jacket by Bandoleiro

Buenos Aires gallery owner Daniela Luna is just as likely to be caught reading The Harvard Business Review as she is to be seen dancing on a pole at six in the morning. She’s the outspoken mastermind behind Appetite, where you can’t turn a corner without coming face to face with photographs of sizable cocks, or more recently, a gigantic pink inflatable bear with breasts. Some of the city’s best DJs have made their debuts at her War Club parties, and with Appetite showing everywhere from Lithuania to London, this international gallery is becoming more than just a downtown destination for the scrappy chic.

How did Appetite start?
I was having a very bad time of my life and I said, “Okay, now I want to do something productive.” I am one of the few freaks who really loves working, so I decided I wanted to do something of my own. I thought first, “I’ll do fashion design.” I realized I wanted something that included people. I decided to go with contemporary art because that’s the excuse for doing anything. If you’re doing contemporary art, you can do music, you can do design, you can do whatever you want.

And the sex angle?
I really like working with sex, mostly because I like artists to express themselves with no censorship, and of course, sex is a very important part of life. I wanted the artists to be able to do whatever they want, but also I wanted it to be strong as a gallery and to have international projection. That was something that was seen as a contradiction. Also, I had almost no money. When I began, I could only survive for six months, and if it didn’t work, I lost everything. It was a big challenge, but I like challenges. I was the first gallery in San Telmo.

Besides New York and Buenos Aires, where have you taken Appetite?
I’ve been working in Miami. I’m going tomorrow to London, and I’m starting work in China. When I wanted to get into Frieze Art Fair, no other Argentinean gallery had ever gotten in. Everyone said, “No, no way, it’s impossible.” I said I was going to do it, and I did.

When I first got here, I heard that you threw the best parties.
I love that! Well, it’s true. Some of them go until the next day, and then I put some mattresses on the floor for people, and they wake up again and go on partying. Because if you get what I do with art and with artists, it’s going to be the same kind of spirit. It’s always about experimenting. I try to work with the best new DJs and at the same time invite artists to do performances and video. I’m a party girl, so that’s why I know how to give a party. I know the best from New York, to Moscow, to Lithuania, to London. Wherever I go, I know how to find the parties.

Which are your favorites in Buenos Aires?
Well, my parties are the world-class parties. But after that, the best of the best is Zizek. They have, of course, the good nights and the not-so-good nights, but I really like what they do. They started around the time that I did, and many of their DJs played here in the beginning. At the opening party for Appetite, I had some people from Mexico from this amazing record label, Nuevos Ricos. They came here with some of the people from Zizek. Also, Santera. They’re doing it in Niceto. It has kind of the spirit of Zizek, music that is very different.

You spend a lot of time in New York. What are your favorite parties there?
I really like Six Six Sick. I go all the time because the girls are really fun. I like how they dress. Before, I used to go to Misshapes, but then that closed. I was always dancing on the pole there. When I’m in the mood for something much more relaxed, I go to Darkroom. Usually I prefer crazy, of course. What I DON’T like of the New York parties in general is that they finish so early. Down here, we are very night people. In New York, I always get there at two or three when the party’s already finishing, and I want to kill myself! I try to be early, but I can’t. I just can’t.

What does Argentina do right with contemporary art?
We have lived in crisis for many, many years. Maybe always. We’re very used to that, so we can handle it. Here in Argentina, you say, atarlo con alambres, “tie it with wire.” So you don’t have things, you just tie it with wire. And that’s something that’s mostly positive because art is very creative and very expressive, and if you don’t have the money, you’ll find another way. ver link

What do you think? Cancel reply