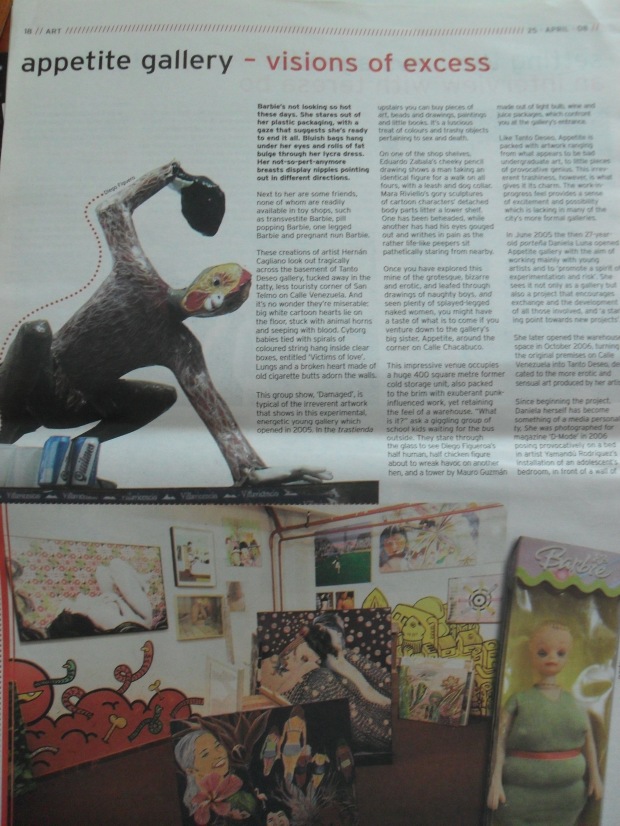 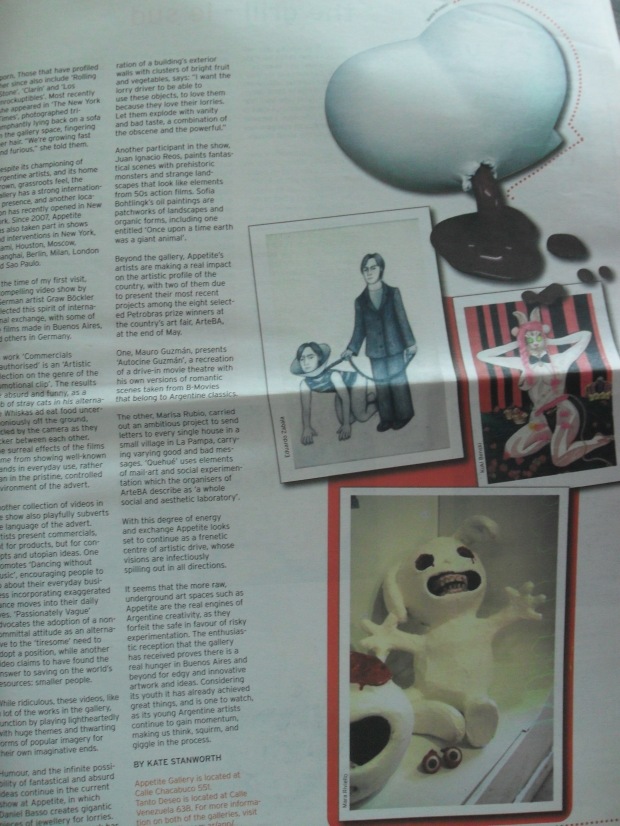 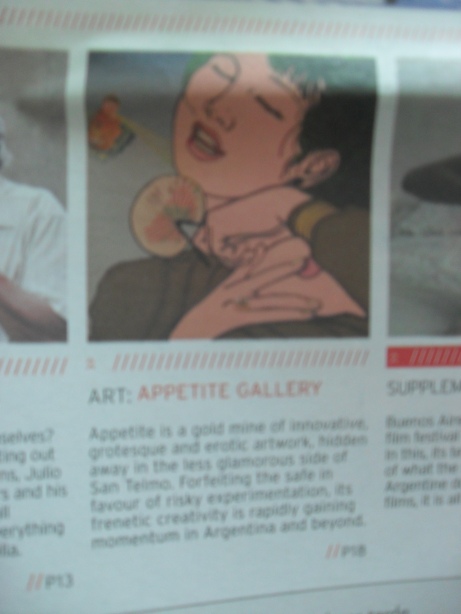 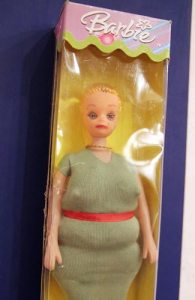 Barbie’s not looking so hot these days. She stares out of her plastic packaging, with a gaze that suggests she’s ready to end it all. Bluish bags hang under her eyes and rolls of fat bulge through her lycra dress. Her not-so-pert-anymore breasts display nipples pointing out in different directions.

Next to her are some friends, none of whom are readily available in toy shops, such as transvestite Barbie, pill-popping Barbie, one-legged Barbie and pregnant nun Barbie.

These creations of artist Hernán Cagliano look out tragically across the basement of Tanto Deseo gallery, tucked away in the tatty, less touristy corner of San Telmo on Calle Venezuela. And it’s no wonder they’re miserable: big white cartoon hearts lie on the floor, stuck with animal horns and seeping with blood. Cyborg babies tied with spirals of coloured string hang inside clear boxes, entitled ‘Victims of love’. Lungs and a broken heart made of old cigarette butts adorn the walls.

This group show, ‘Damaged’, is typical of the irreverent artwork that shows in this experimental, energetic young gallery which opened in 2005. In the trastienda upstairs you can buy pieces of art, beads and drawings, paintings and little books. It’s a luscious treat of colours and trashy objects pertaining to sex and death.

On one of the shop shelves, Eduardo Zabala’s cheeky pencil drawing shows a man taking an identical figure for a walk on all fours, with a leash and dog collar. Mara Riviello’s gory sculptures of cartoon characters’ detached body parts litter a lower shelf. One has been beheaded, while another has had his eyes gouged out and writhes in pain as the rather life-like peepers sit pathetically staring from nearby. 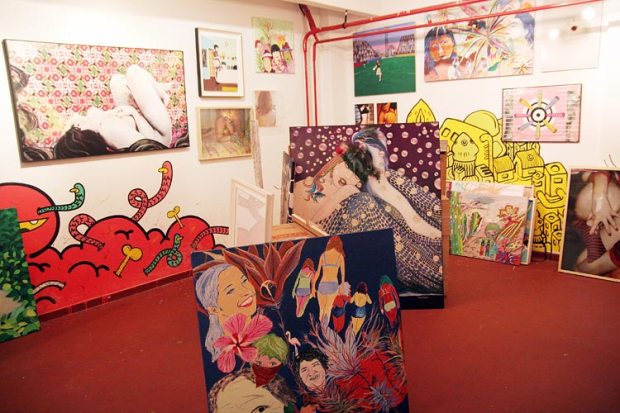 This impressive venue occupies a huge 400 square metre former cold storage unit, also packed to the brim with exuberant punk-influenced work, yet retaining the feel of a warehouse. “What is it?” ask a giggling group of school kids waiting for the bus outside. They stare through the glass to see Diego Figueroa’s half human, half chicken figure about to wreak havoc on another hen, and a tower by Mauro Guzmán made out of light bulb, wine and juice packages, which confront you at the gallery’s entrance. 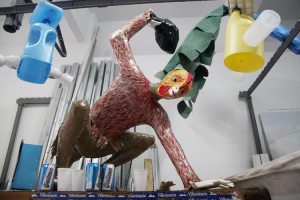 Like Tanto Deseo, Appetite is packed with artwork ranging from what appears to be bad undergraduate art, to little pieces of provocative genius. This irreverent trashiness, however, is what gives it its charm. The work-in-progress feel provides a sense of excitement and possibility which is lacking in many of the city’s more formal galleries.

In June 2005 the then-27-year-old porteña Daniela Luna opened Appetite gallery with the aim of working mainly with young artists and to ‘promote a spirit of experimentation and risk’. She sees it not only as a gallery but also a project that encourages exchange and the development of all those involved, and ‘a starting point towards new projects’.

Despite its championing of Argentine artists, and its home grown, grassroots feel, the gallery has a strong international presence, and another location has recently opened in New York. Since 2007, Appetite has also taken part in shows and interventions in New York, Miami, Houston, Moscow, Beijing, Berlin, Milan, London and Sao Paulo.

At the time of my first visit, a compelling video show by a German artist Graw Böckler reflected this spirit of international exchange, with some of the films made in Buenos Aires, and others in Germany.

His work ‘Commercials Unauthorised’ is an ‘Artistic reflection on the genre of the promotional clip’. The results are absurd and funny, as a mob of stray cats in his alternative Whiskas ad eat food unceremoniously off the ground, circled by the camera as they bicker between each other. The surreal effects of the films come from showing well-known brands in everyday use, rather than in the pristine, controlled environment of the advert.

Another collection of videos in the show also playfully subverts the language of the advert. Artists present commercials, not for products, but for concepts and utopian ideas. One promotes ‘Dancing without music’, encouraging people to go about their everyday business incorporating exaggerated dance moves into their everyday lives. ‘Passionately Vague’ advocates the adoption of a noncommittal attitude as an alternative to the ‘tiresome’ need to adopt a position, while another video
claims to have found the answer to saving on the world’s resources: smaller people.

While ridiculous, these videos, like a lot of the works in the gallery, function by playing lightheartedly with grand themes and thwarting forms of popular imagery for their own imaginative ends.

Humour, and the infinite possibility of fantastical and absurd ideas continue in the current show at Appetite, in which Daniel Basso designs gigantic pieces of jewellery for lorries. The artist, who’s past work has included a collection of gaudy spoilers for cars, and the decoration of a building’s exterior walls with clusters of bright fruit and vegetables, says: “I want the lorry driver to be able to use these objects, to love them because they love their lorries. Let them explode with vanity and bad taste, a combination of the obscene and the powerful.” 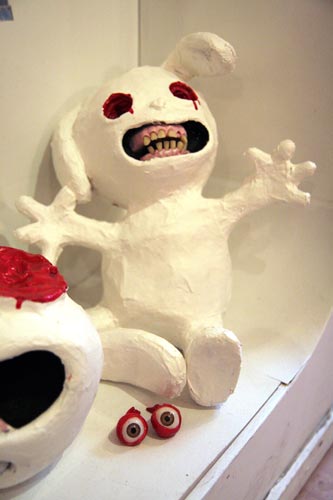 Another participant in the show, Juan Ignacio Reos paints fantastical scenes with prehistoric monsters and strange landscapes that look like elements from 50s action films. Sofia Bohtlingk’s oil paintings arepatchworks of landscapes and organic forms, including one entitled ‘Once upon a time earth was a giant animal’.

Beyond the gallery, Appetite’s artists are making a real impact on the artistic profile of the country, with two of them due to present their most recent projects among the eight selected Petrobras prize winners at the country’s art fair, ArteBA, at the end of May.

One, Mauro Guzmán, presents ‘Autocine Guzmán’, a recreation of a drive-in movie theatre with his own versions of romantic scenes taken from B-Movies that belong to Argentine classics.

The other, Marisa Rubio, carried out an ambitious project to send letters to every single house in a small village in La Pampa, carrying varying good and bad messages. ‘Quehué’ uses elements of mail-art and social experimentation which the organisers of ArteBA describe as ‘a whole social and aesthetic laboratory’.

With this degree of energy and exchange Appetite looks set to continue as a frenetic centre of artistic drive, whose visions are infectiously spilling out in all directions. The sense of excitement that has developed around the gallery proves there is a real hunger in Buenos Aires and beyond for edgy and innovative artwork and ideas. Considering its youth it has already achieved great things, and is one to watch, as its young Argentine artists continue to gain momentum, making us think, squirm, and giggle in the process.

What do you think? Cancel reply